[update: you can see an implementation here ]

A primary use of gossip is for information diffusion: some event occurs, and our goal is to spread the word [3]

They are a communication protocol, a way of multicast messages inspired by:

Trying to squash a rumor is like trying to unring a bell.
~Shana Alexander

Rumours in society travel at a great speed and reach almost every member of the community, and which is even better without needing a central coordinator.

It is a basic result of epidemic theory that simple epidemics eventually infect the entire population. The theory also shows that starting with a single infected site this is achieved in expected time proportional to the log of the population size. [1]

How do they work?

With fanout = 1, then O(Log N) cycles are necessary for the update to reach all the nodes [4].

In most implementations a node has a partial view of the nodes, in order to keep a completed view of the nodes, each node should have stored the whole list and it should be able to update the list constantly, for example if a node is inaccessible it should be removed from the set in each other node, which is a very complex task. [5]

In general we can observe the followings properties [4] [13]:

But as I said there is no standard definition, and according to Birman[3], a gossip protocol is one who satisfies the following properties:

Both lists are similar although this one is more restricted, for example the previous definition doesn’t mention anything about sharing the state between the nodes.

They’re randomized algorithms as they select the node to which send the message randomly. All Gossip protocols rely on a service to provide every node with peers to exchange information with. This service is call “the peer sampling service” [7] which we’ll see later in details.

They’re not deterministic, as we’ve mentioned before they’re randomised , so it’s not possible to mimic the behaviour, one run of the algorithm is different from the other. The reliability level can be very high; unless malicious faults are considered, outcomes with probability 1 are common [3].

For some type of gossip (complex epidemics) we only can have probabilistic guarantees that can be tune with some parameters like the cycle, fanout, etc. You can see a simulator here

A bit of history (Epidemic Algorithms for Replicated Database Maintenance)

The paper “Epidemic Algorithms for Replicated Database Maintenance” [1] (1987) is considered to be seminal.

It’s not clear when was the first time Gossip protocols were first used in Distributed systems [3], it is believed that it was in 1987 as described in the paper “Epidemic Algorithms for Replicated Database Maintenance” [1], although information dissemination was used before that [14] and before that Baker and Shostak [15] described a gossip protocol.

The problem they were trying to solve can be summarize:

States of a node

Gossip protocols literature have adopted some terms from the epidemiology literature [1], namely the SIR model [2]:

Removed is trickier than rest. It’s not easy to determine when a node should stop sharing the info/update. Ideally a node should stop sharing the update when all the nodes is linked with have the update. But that would mean that node would have to have knowledge of the status of the other nodes.
Later we will see different algorithms, approaches to mark a node as Removed.

They analysed 3 methods for spreading the updates:

Last two algorithms are epidemic/gossip algorithms and are remained as the two types of Gossip protocols (for some authors [3] Aggregation is another type too).  So let’s see a more generic description of these types.

The name of anti-entropy is because the algorithm was used to reduce the entropy in the replicas, or in other words, to increase similarity between them.
In Anti-entropy (SI model) a node that has an infective info is trying to share it in every cycle. A node not only shares the last update but the whole database, there are some techniques like checksum, recent update list, merkle trees, etc that allow a node to know if there are any differences between the two nodes before sending the database, it guarantees, eventual,  perfect dissemination.
There is not termination, so It sends an unbounded number of messages.

Rumor Mongering cycles can be more frequent than anti-entropy cycles because they require fewer resources, as the node only send the new update or a list of infective updates. Rumour mongering spreads updates fast with low traffic network.
A rumor at some point is marked as removed and it’s not shared any more, because of that, the number of messages is bounded and there is some chance that the update will not reach all the sites, although this probability can be made arbitrarily small as we’ll see later. First let’s see how to decide when a node should be in state “removed”.

(based on a presentation from Mark Jelasity [16]).

As we mentioned above there is some chance that an update will not reach all the sites, but this probability can be made arbitrarily small, because rumor spreading can be modeled deterministically.

s is the proportion of nodes that do not know the update when gossip stops or that remain susceptible. 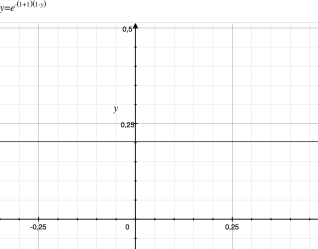 Therefore, the algorithm we use to determine when a node is in removed state or loss interest in sharing is very important.

Strategies for spreading the gossip/update

These strategies apply for both anti-entropy and rumor mongering:

When there are a lot of updates/new info, pull is pretty good because is pretty likely that it’s going to find a node with new updates. When there are very few updates, push is better because it doesn’t introduce traffic overhead.

During the initial phase push strategies are more efficient because there are very few infective nodes, so polling requests are in vane. Pull becomes more efficient during the last phase where there are a lot of infective nodes and it’s easier to get the update, for the same reason push strategies in the last phase are not very efficient as most of the requests are sent to nodes that already know the update. That’s why there are other strategies like First-Push-Then-Pull that try to take advantage of this. [6]

In “Epidemic Algorithms for Replicated Database Maintenance.” you can find an analysis of the complexity and probability of each strategy. Although that paper is a must for gossip I’d recommend the first chapter of the book: Gossip-based Protocols for Large-scale Distributed Systems[4] because everything is very well explained.

In the SI model, there is no termination, so push is constantly sending updates even after each node has received every update. And as pull doesn’t know the list of all updates in advance, so it has to keep asking for updates.

In the SIR model, when an update/information is marked as removed is not going to be sent again.

How to measure good epidemics

In the paper [1] they proposed the following metrics:

In the simulations we can see that with Feedback and counter the proportion of nodes that remain susceptible is smaller, although they have a bit more traffic.

These simulations are done with push strategies, so how they behave using pull?

As we can see pull has a big impact in the proportion of nodes that remain susceptible, but with much more traffic

As mentioned before every Gossip protocol relies on this service, and it’s important to note that even if in a Gossip protocol we can’t find this as a proper abstraction, it is there, a gossip protocol needs a way to choose a node to exchange information and that’s the peer sampling service.

The name was coined in the fantastic paper [7] as well as its definition.

In the figure you can see a typical algorithm for a Gossip protocol, in the line 3, there is the Peer Sampling Service.
The API of the service is really simple:
– init. (What nodes a node knows initially?)
– selectPeer or getPeer. (Return a peer/node address from the set, ideally it should be an independent uniform random sampling)

membership table would have to be maintained constantly, and in a real large system where there will be “churn” (change in the set of participating nodes due to joins, leaves, and failures) is a really hard task. So, although the Gossip protocol and the application are supposed to be scalable the selection of the peers is not [7].

It’s usually assumed that the selection of  peers follows a uniform random sample of all nodes in the system, and this assumption made it possible to rigorously establish many desirable features of gossip-based protocols like scalability, reliability, and efficiency. But through extensive experimental analysis has been showed that all of them lead to different peer sampling services none of which is uniformly random [7][4].

The algorithm shown in [7] follows this idea:

In other words,  every node maintains a relatively small local membership table that provides a partial view on the complete set of nodes and periodically refreshes the table using a gossiping procedure [7].

Both initialize and merge can work in different ways, each of these are analyzed and compared with uniform random sampling.